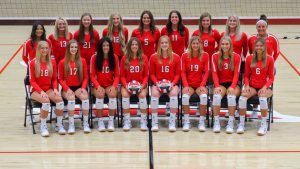 Grace College’s volleyball team will feature a young, hungry squad on the court in 2021.

Of the 17 players on Grace’s roster, eight are starting their first collegiate seasons. Three more players are beginning their second year, resulting in a youth-infused squad.

But the Lady Lancers are not short in athleticism, explosiveness and potential. Head coach Katie Van Hofwegen has brought in a talent-filled class this summer, resulting in a dynamic roster that is poised to surprise opponents.

The team recovered at an opportune time, qualifying for the NCCAA National Championships and advancing to the national semifinals to end the year on a high note.

While the Lady Lancers are not as polished as the veteran-led squad of last year at this point of the preseason, Van Hofwegen was confident that the young Lady Lancers are primed for explosive improvement.

“We will be playing freshmen and sophomores across the court, so there will be growing pains as they adjust to the speed of the game. Even our sophomores did not get a full season last year due to COVID,” she said. “But this team is eager to grow and learn. I fully believe that we will finish the season far better than how we start because of their work ethic and talent. They are a very enjoyable group to coach.”

Two main pieces have resulted in a productive preseason, according to Van Hofwegen: enthusiasm and athleticism.

Grace is dedicated to reflect joy this year, largely due to the emotional and physical toll from a COVID season in 2020. The team’s theme is “For one, as one” which speaks to the need to remain united in mission and in joy.

“Our team realizes now that volleyball and normalcy can be taken away in a second. So we are finding a newfound appreciation for every opportunity. We want to rejoice in every moment of the season, the highs and the lows, and find ways to praise God and celebrate each others’ successes,” she said.

On the court, Grace’s overall athleticism has been noticeable. Van Hofwegen stated that this year’s team was one of the most athletic units she has ever coached. Grace’s athleticism has allowed the young team to get up to speed quickly while also bringing excitement to the practice floor.

Grace’s middle hitters are all young. Jenna Mueller seemed to get stronger as her freshman season progressed last year and was a key player at NCCAA Nationals.

Mackenzie DeLong worked her way up from the JV squad last year and provides a hard-working, efficient approach. Freshman Alisha Leffring is Grace’s tallest player at 6-foot-1 and is likely to see significant time right away due to her energy and ability to score at the net.

The Lady Lancers are the deepest at the pin positions. Anna Frey is one of the more well-rounded players on the team, providing a high-level ability to pass, block and find kills on a routine basis. Cassadi Colbert was second on the team last year in kills and kills per set and offers a powerful swing on offense.

Katie Swanson and Kate Sperry both are returning from injuries last year and have impressed during the preseason, according to Van Hofwegen. Junior Jadyn Block is one of the smartest players on the floor and routinely places the ball where she wants to.

Incoming players Jadyn Ross and Sahara Bee have potential to play immediately. Bee is a tall, physical presence at the net (6-0) who is gaining confidence daily, and Ross has been one of the standouts of preseason camp because of her energy and ability to make her teammates better.

The back row will be anchored by Gina Novotny, a super-senior entering her fifth year (granted an extra year of eligibility because of COVID). Novotny has racked up 1,943 digs in her career and is on the verge of becoming the third member of Grace’s 2,000-dig club.

Grace Erwin is the other returning defensive specialist, tallying 2.2 digs per set a season ago.

Joining them are freshmen McKenzie Stakely and Paige Vander Goot. Both are naturally energetic with the ability to develop into key members of the back row, according to Van Hofwegen.

The biggest unknown entering the year resides with the setter position. Grace has three new setters to compete for time, and each player brings a very different setting style, according to Van Hofwegen.

Emily Peterson is athletic with good hands and brings composure and leadership to the floor. Riley Owens is a technically-savvy player and a strong defender, while Morgan Syoen can set and adds the ability to block dynamically from the front row as well.

“The challenge of having young players in such a pivotal role is to get them comfortable in a leadership position early on,” Van Hofwegen said. “All three of our setters are in their first seasons, so we are learning together which connections work the best on the court.”

Van Hofwegen wants the Lady Lancers to focus on smaller goals this fall in order to show incremental growth. “We want to focus on the present moment whenever we can. We want to give our best effort every single game, every practice and every rep. That will help us build on each success during the season,” she said.

The Lady Lancers will begin the season in Florida this weekend. Grace will play a four-game tournament at Warner on Friday and Saturday.

Grace’s following match will be its home opener on Sept. 1 against Taylor.