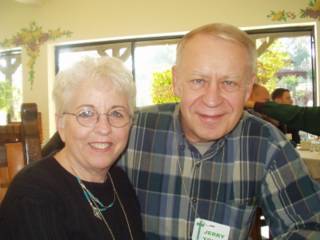 Pastor Jerry Young (right), who was at the Sandy Cove Focus Retreat earlier this week, flew home to Phoenix with his wife, Loreen, Wednesday night only to discover that their truck had been stolen. Jerry says it’s not likely to be recovered, for the police have said, “It’s probably in Mexico, or on an Indian reservation.” The Youngs request prayer for wisdom, because insurance will likely not be enough to replace the truck, and without the truck they cannot pull their 5th wheel trailer, in which they planned to live while traveling the country on behalf of the Association of Grace Brethren Ministers, encouraging pastors and their wives. “Decisions Loreen and I make over the next 30 days will affect us profoundly over the next six months,” Jerry says. “Ask that wisdom be granted to us. Thanks.”