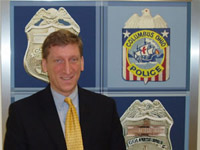 Ken Lawson, a member of Grace Polaris, a Grace Brethren church in Columbus, Ohio (Mike Yoder, pastor) and a Columbus police officer, has been nominated for an Ohio Liberator Award for his efforts to combat human trafficking. Individuals are encouraged to vote for the recipient on Survey Monkey between Dec 20, 2013 and Jan 10, 2014.

The Ohio Liberator Awards were created by TraffickFREE-S.O.A.P. to highlight and celebrate the hard work of individuals whom have helped to make great strides in the state of Ohio in eradicating modern day slavery. In 1835, Abolitionist William Lloyd Garrison called for the ‘immediate eradication of slavery and for equal rights to blacks and women.’ He was considered a “Radical Abolitionist” due to his beliefs and published “The Liberator” to educate Americans on these important human rights issues.

Read more about Lawson and his work with human trafficking here:

Trafficking in Humans Still an Issue